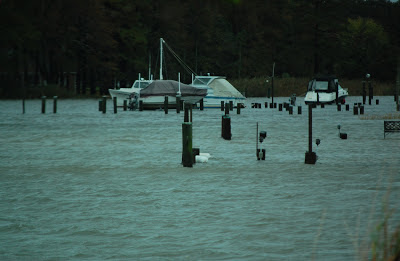 Dressing up The Annie Buck in The Eye of The Storm 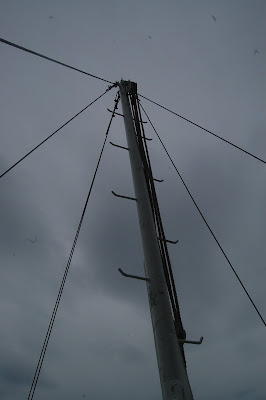 Phase II of the Annie Buck's change over from her summer outfit to her winter outfit occurred as two incredible storms were on our doorstep: Hurricane Sandy (otherwise known as Frankenstorm) and the 2012 Presidential Elections. As I write this, the hurricane is bearing down on us, so if my writing seems a bit off, it's because I've got my mind in a few different places. This story is about yesterday and as I write it I don't know what the outcome of today will be...

It has to be done when it has to be done and on the day the rain bands were arriving in advance of Hurricane Sandy, it was necessary to install the mast and boom used for oyster dredging into the Annie Buck to be ready in time for the season.
About a month ago, I wrote about the removal of her canopy, a coordinated task involving the efforts of a number of Watermen and neighbors. This is a similar type of task. The mast is made of steel and, although I don't know exactly what it weighs, it weighs at least several hundred pounds. It is the long pole with the “whiskers”, which are steps to climb to its top for whatever maintenance might be required. The Boom is made from aluminum and it weighs somewhat less, but the winch attached to it adds a lot of pounds.


All of the work was again supervised by“Keeper”, who knows all corners of the boat. Our part starts when we meet David at his truck, where he has somehow managed to load both mast and boom. They are precariously balanced, the weight bolstered by some people sitting on the truck-cab ends as if on a see-saw. The trip to the boat is about 500 yards and uneventful.


The mast has to be installed first, but the boom is on top, and so it is the first off the truck. It is placed out of the way, as much as it can be, on the dock.


As it was when we removed the canopy, you find that it's a long distance from the decks of the boat to the floor, especially when you are carrying something heavy and even more so when there is a momentum to the object being carried, because of all of the people involved. Everyone has to be quick and careful and to be aware that if you are at the wrong part of the dock, or boat, it is easy to step off onto nothing and end up in the water.

The bottom of the mast is attached to a board which is bolted to the floor just behind the pilot house. That board is bolted to the mast first and then the mast is brought upright. There is a bit of finagling to get the bolt holes in the board to line up with those in the floor. When the holes are aligned, lag bolts are set in, but the mast is by no means secured.


What really controls the stability of the mast are the various lines running from the top of the mast to the bow of the boat and to points near the sheer line in the forward half of the boat. These lines are made of “wire rope” and their tension is controlled by long turnbuckles.

After the mast is in place, the boom is brought aboard and attached to its mounting point by a very sturdy assembly made of stainless steel. Of course, as we are doing all of this, there is a wall-like line of clouds in the SouthEast sky; probably the first part of Sandy...

The boom is not raised yet to its normal spot. It doesn't need to be today. It's time for everyone to go and batten down the hatches at home. 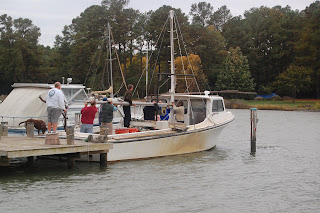 I just want to say that it's clear as I write this, that  a lot of people that we know and love are going to be hit hard by this one. I hope that everyone fares well in Hurricane Sandy...

If you are a regular user of Cyano Acrylate glues, otherwise known CA as Super Glue, it's likely that you do. 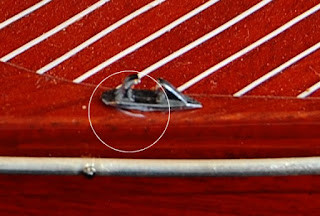 "Gassing" is the white residue that appears around your glue joints, especially on dark surfaces, clear surfaces, or on shiny metal. It makes an otherwise perfect joint, look, not so perfect. Sometimes it's an indication that too much glue has been used. At other times, especially with gels, you may not have a choice but to use an amount of glue that makes gassing unavoidable. 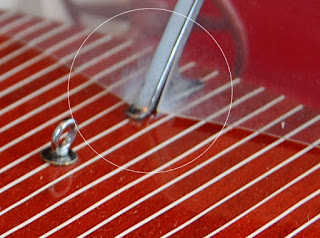 One of the biggest problems involving gassing is that it might not show up until a day or two after you've made your joint. This can be fixed if you can get to the joint. I avoid using CA to close up cabin spaces on boats or airplanes, because gassing may not appear for quite some time and it may be amplified in small enclosed spaces, possibly frosting windows to an extent that blocks vision. This can be "visually fatal" to an otherwise impressive interior space.
﻿﻿﻿﻿
﻿﻿ In those situations I use non-gassing glues, such as type II carpenter's glue, epoxy or watch crystal cement, depending upon the specific situation. Of course, each glue has its own pluses and minuses.
﻿﻿
If your gassing is in an accesible spot...


...relief from gas can be found on your grocery store shelf...
I am a believer in the concept that model makers can benefit from learning to see and use common things outside of their common context. Here is an excellent example. I found this method by accident years ago and it's helped me many times since:  Olive oil applied directly to gassing seems to make it disappear. There are cases where it doesn't do the job completely, but those are rare. I haven't found anything that works as well. What you have to bear in mind is that it is an oil, which could affect other nearby items in your model, especially unsealed wood or the adhesive of graphics tapes. I usually dedicate a very small artist's brush to the job which allows me to apply it precisely and sparingly. After it sits for a minute, or when I can see that the gassing is gone, I lightly dab the excess oil away with a corner of a paper towel. Give it a try!