Those Who Have Read The Book... 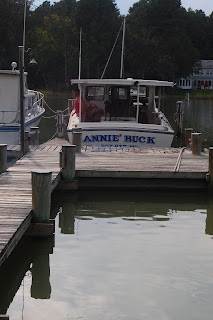 ...will remember David and his boat the “Annie Buck”. As I was struggling to get one of my special tools, an ancient Alps MD 5000, otherwise known as the decal printer to have, to work, I was interrupted with a pleasant surprise. It was David outside my door yelling “Anyone want to go for a boat ride?” I've had a lot of rides in all kinds of boats and ships, but I still and always will, look forward to this one. 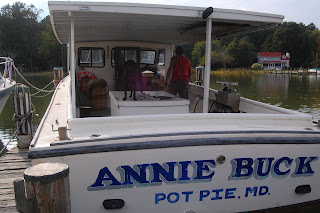 It's that time of year again. Fall is upon us and Watermen throughout the Chesapeake region are changing their rigs from crabbing gear to oystering gear. As you'll recall, the summers here can be very hot. To protect the waterman and his catch from the broiling heat, a Deadrise, the type of workboat most frequently used in the Chesapeake Bay, is often outfitted with a seasonal “canopy” (Don't call it a "roof"). 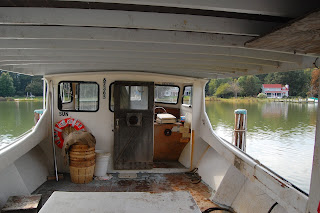 There is a reason for the ride.We are bringing the boat to the town wharf where other watermen and neighbors come together in order to remove her canopy for the winter. It weighs hundreds of pounds and, despite its size, can easily be damaged. David will, in turn, go around to help other watermen take the canopies off of their boats. It's a rite of Autumn.  In the near future we will be installing some winter equipment in another rite of the season - more on that when it happens... 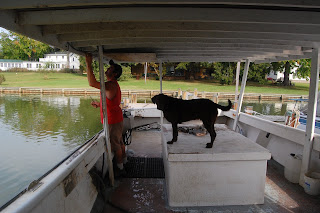 David's co-pilot, “Keeper” is along for the ride. I've often heard that “dogs like trucks!” I can tell you that when a dog likes a boat...  well...  Let's just say that Keeper loves his boat!

For this ride the sky is ominously dark, but no rain. The water's surface is like glass. As you'll recall, the “Annie Buck” has a planing hull. True to form, when David hit the throttle she virtually lept out of the water. What a ride. We live in a truly beautiful place. It's beautiful from the land, but it's beautiful in an entirely different way from the water. 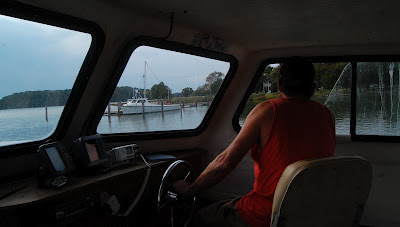 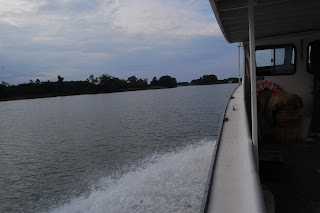 It's a good thing that there are other watermen involved. They know just how to handle things so that nothing, including people gets damaged.

On the “Annie Buck” the support structure is this: the front edge of the canopy is supported by the roof of the pilot house. In the rear area it is supported by struts running from the floor of the cockpit to the canopy's frame. These struts are also bolted to the gunwhales to increase rigidity.


In preparation, David has removed most of the bolts in the struts, leaving those that remain loose. A stuck bolt, to be expected in the marine environment, can bring the whole process to a halt. 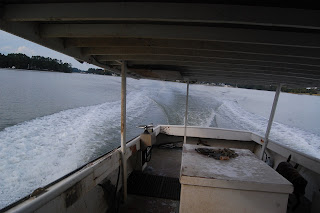 When the process begins, some people move to hold up the rear of the canopy frame; others unscrewing and punching out the remaining bolts from the struts. The struts crash to the floor and suddenly everyone is  holding up the full weight of the canopy. It gets heavier when some people let go in order to step from the boat onto land. Once there, they resume their lifting and the canopy is moved just far enough from the boat that part of its frame can rest on some pilings allowing those of us, still in the boat, to get out and resume our positions. From there we carry it about 50 feet to a waiting trailer. (Unfortunately, I don't have photos of the process itself, because my hands were a bit full.) 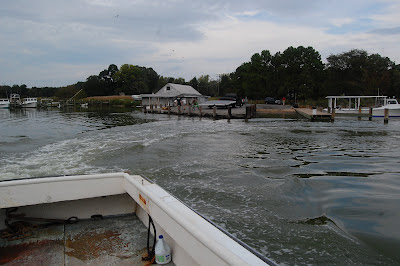 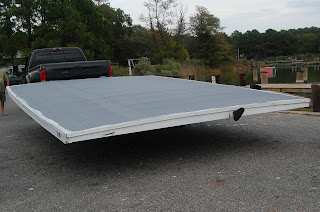 On the trailer are 4 inverted bushel baskets. They are maneuvered to points that support the frame of the canopy. We can finally let it down. The canopy is much longer than the trailer, requiring a delicate balancing act to make sure that it doesn't come off of the trailer during the ride to David's house. I find it amazing to think that these lightweight baskets, only 4 of them, can support the hundreds of pounds that the canopy weighs. It's a good lesson in physics...
The ride home is beautiful again. You can see how different the boat looks when the canopy is absent. Things are opened up and brighter. The boat seems just a bit faster; perhaps an illusion, but it does weigh less and should be a bit more aerodynamic than it was with the canopy installed. 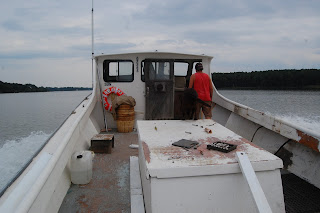 The whole lifting process took much less time than either trip, probably under 4 minutes. But, there is a level of intensity about it, with everyone seemingly choreographed to do the right thing at the right time. By comparison lifting it from the trailer, once home,  was a quick task of laying down some cinder blocks and resting the canopy on them until it's needed next spring. 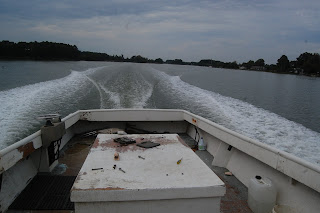 As I re-read this, I fear that I may be giving the impression that this was about having fun. No, it's just a small part of the very, very hard work that watermen do. For me, it is an honor and learning experience to partake. Hopefully, some of this information will be of help you as you work up your own model of the "Annie Buck".
I am grateful for the opportunity to be there and wish all of my waterman friends the best of success in the coming oyster season.


Funny thing, now that I'm home. For some reason, my Alps printer seems to be working again. Now I can get back to what I know how to do well... 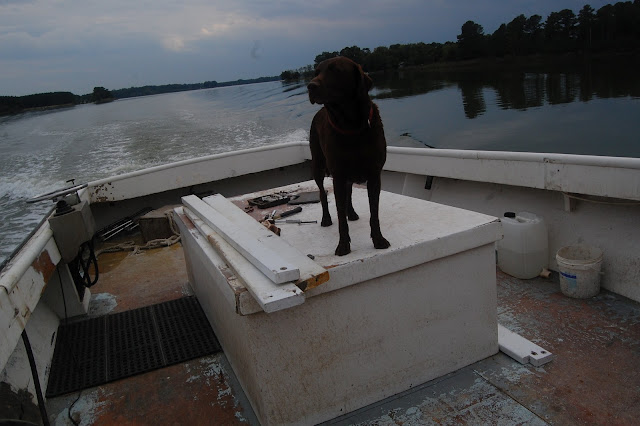 
Learn all you can. 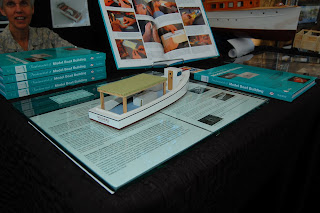 After this record setting hot summer I'm looking forward to some cooler times...


Not that I love to be cold, but I am really looking forward to the autumn show schedule coming up. It's relatively relaxed compared to the last few months.

The remainder of our schedule has us working relatively close to home. 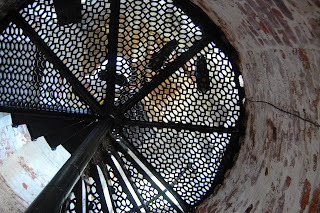 This year, we've traveled to New York City, Upstate New York, Ohio, Florida, Pennsylvania, New Jersey and a number of other places. Our dog Lucky, our cats Leon and Lenny and our goats, Isabella, Maggie and Vinnie have indicated that they'd prefer to have us close to home, at least for a little while. 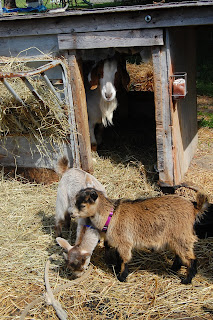 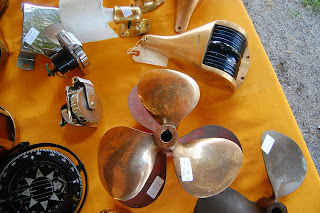 Of course, a show schedule is never etched in stone; and it's probable that someone will invite us to a show too good to pass up or someone will invite us to do a book signing. But it's unlikely that we'll end up more than a few hundred miles from home this late in the year. Not that we don't love the atmosphere of shows and the many friends that we only see on the road, but we've spent quite a few hot days in our tent this year and our home is the Chesapeake Bay. It's a really beautiful place in the autumn. 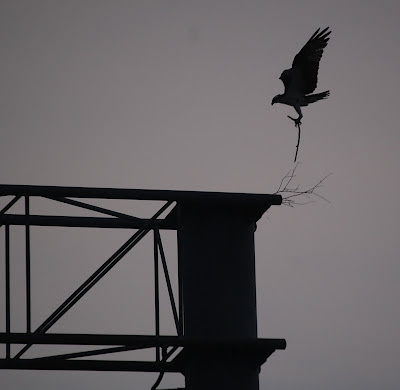 Among the special things here is that we are on one of the great flyways of the U.S. Pretty soon the Ospreys will vanish and in their place there will be tens of thousands of Canada Geese.

A lot of people come to visit our region during the summer. As autumn arrives, things become very quiet, except for the sounds of nature. As the human population drops, nature comes out of its hiding places. The water becomes still for this short time before the Northwest winds of Winter come along.


We use this time to catch up on our backlog of model work and, of course, that next book. It's pretty much written already. With sixty some odd chapters so far, there is more than enough information to fill a few books, but of course, some of it is redundant, some of it is of greater or lesser relevance and the good stuff needs to be purified and organized. Then we'll have a lot of photos to take and drawings to make... 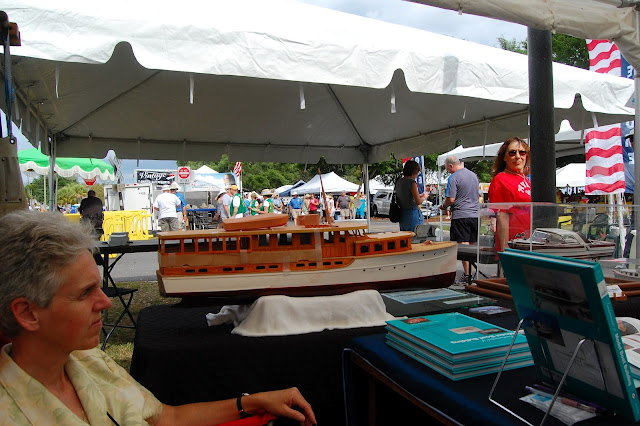 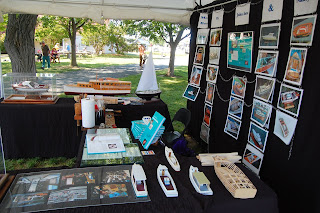 As much as I love to write, model making is the first order of business here. We've got some great customers who have been very patient as we endeavor to make each of their boats into something worth the time that they have endured. Our current projects represent just about any kind of boat you can imagine. As we make each one we work to learn more so that we can make the next one better. Of the things that I've learned over 50 years of model making, I think that this is one of the more important ones.


We have three confirmed appearances coming up before the holiday season. As you read them, remember it's not too early to be thinking about Christmas shopping, especially for the person that seems to have everything, or the person that likes to “tinker”... 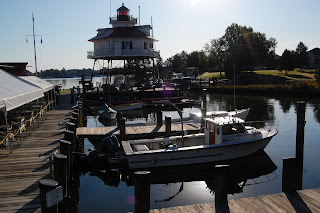 On Saturday, October 6th we will be signing books and answering your questions about model making at the Calvert Marine Museum in Solomons, Maryland during Patuxent River Appreciation Days. We will be there from 2-4 pm. Come get a personally signed copy of “Fundamentals of Model Boat Building” for yourself, or a loved one. When you get to the museum, find the Schiffer Publishing tent, where we will be among a lot of really great books. For more about the festival go to http://pradinc.org 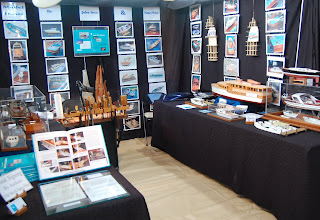 We will be at “The Waterfowl Festival” in Easton, Maryland from Friday, November 9th thru Sunday November 11th at the Emporium, located at the Easton Middle School in Easton Maryland. If you don't know about “The Waterfowl Festival”, let's just say that not only does anybody who is anybody in the region that is in the waterfowl art business come to this show, but you'll even find some who come from other continents to be in this show. We will have our full display, offering our models, demonstrating model making techniques and signing our book “Fundamentals of Model Boat Building” http://www.waterfowlfestival.org 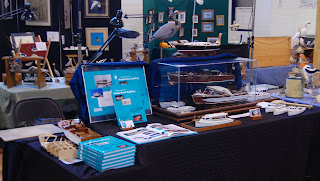 On Black Friday, November 23rd (The day after Thanksgiving) and Saturday November 24th, we will be at one of our favorite shows, The Deborah Foundation Decoy and Art Festival in Chincoteague, Virginia. While not a huge show, the sixty, or so, Carvers, Artists, Photographers, Model makers and other artisans represent some of the most creative and talented people that I know. Chincoteague has long been recognized as a center for fine wildlife art and artisanry, especially when it comes to “bird carving”. We won't be the only Schiffer authors there; Bill Veasey, the famous waterfowl carver and teacher will be there. Others may come, as well. One of the great secrets, in this land of “Mistie of Chincoteague” is that during the show, the Assoteague Wildife Refuge opens seven miles of road that is closed to the public the rest of the year, where you will see things you didn't know existed. Find out more here: http://www.chincoteaguechamber.com


We love meeting our customers. If you happen to have one of our books that isn't signed, come see us, let's talk model-making, and we'll be happy to sign your copy. 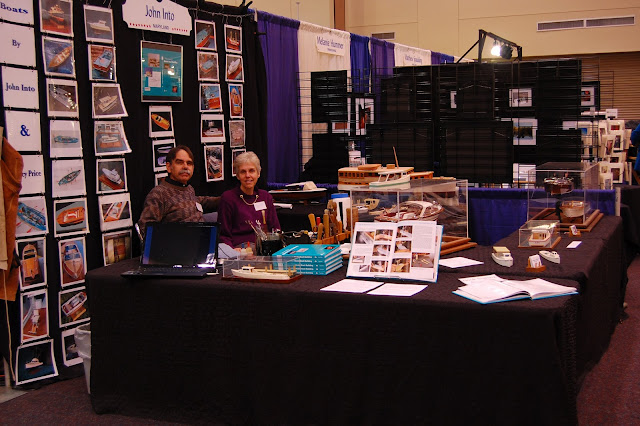